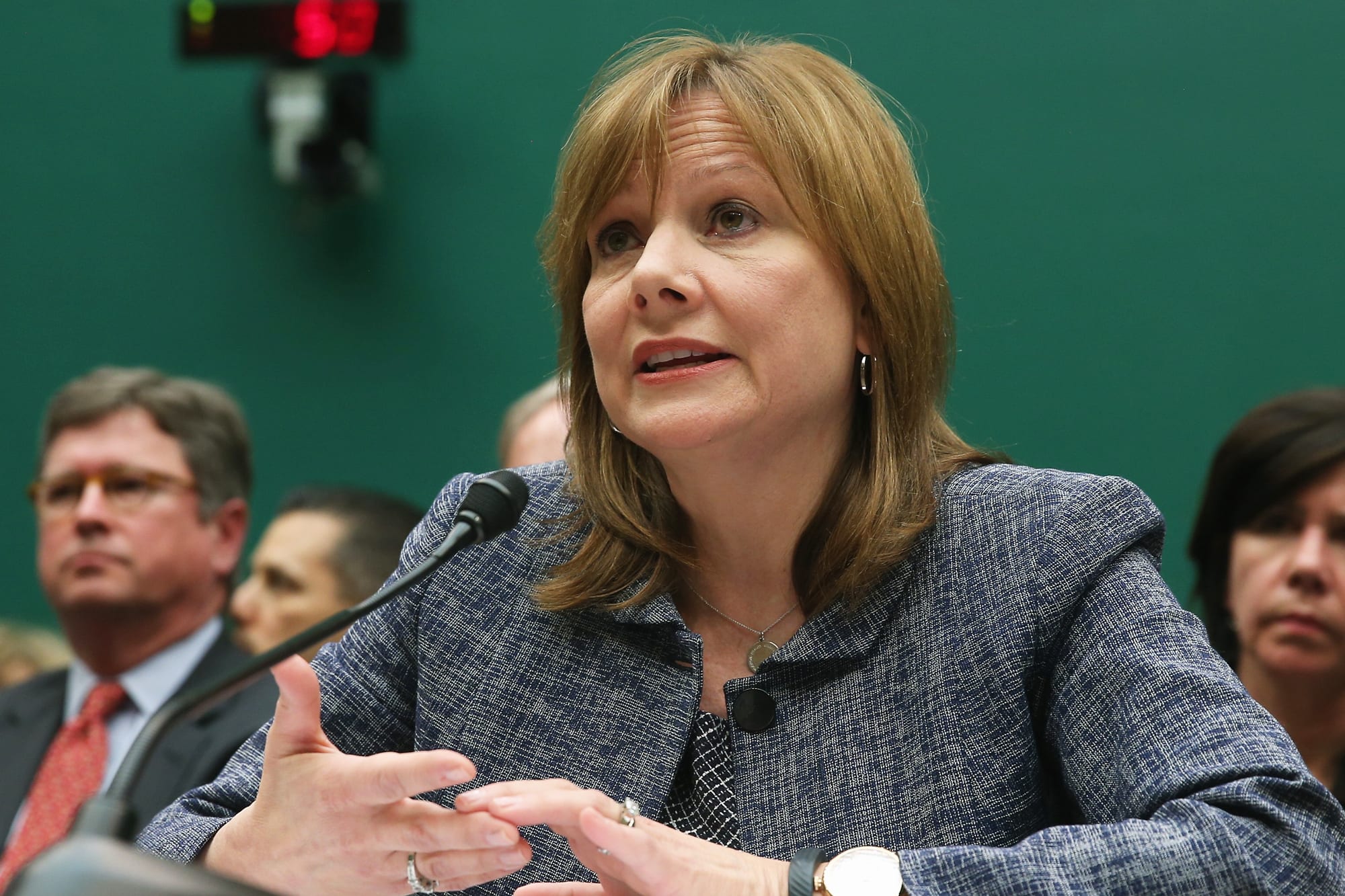 DETROIT — Mary Barra became one of America’s best-known executives when she took the helm as the first female CEO of General Motors in 2014. But the recognition quickly turned to criticism over the automaker’s deadly ignition switch recall scandal.

Less than three months after becoming the auto industry’s most powerful woman, Barra became the face of the crisis as she testified before Congress about defective ignition switches in millions of vehicles. The faulty parts would eventually be found to have been responsible for 124 deaths and 275 injuries.

GM spent billions in recall costs and settlements to victims and their families, including a $900 million fine as part of an agreement with the Justice Department after the Detroit automaker was charged with concealing information from government officials and wire fraud.

GM’s ignition switch scandal is one of many examples of how the global auto industry was held under a regulatory microscope in the 2010s for incidents its critics say failed the public as well as shareholders. Executives from Toyota, Volkswagen and Japanese auto supplier Takata were among the auto industry leaders to be called to Washington to answer for alleged corruption, misdeeds or safety issues in the 2010s.

“I just don’t recall there was a decade like this one in terms of corruption,” said Michelle Krebs, executive analyst at Cox Automotive. “I can’t remember anything like the amount and kinds of things that we saw.”

Recalls have surged this decade. According to data from the National Highway Traffic Safety Administration, automakers issued about 323.4 million vehicle recalls from between 2010 and the third-quarter of 2019, an 81.8% jump from the previous decade. Data for recalls in the fourth-quarter was not available.

While some of the investigations are ongoing, they’ve all forced companies to reshape their operations as the industry enters the next decade. In the case of VW’s 2015 diesel emissions scandal, also known as Dieselgate, the company has accelerated its plans for electric vehicles, and safety regulators have implemented more stringent testing on diesel engines. Some also have questioned if diesel passenger car sales will ever recover as a result of the scandal.

Regarding recalls, automakers more than ever are attempting to use new methods such as over-the-air updates and email instead of standard mail to address safety concerns as soon as possible.

But it’s unclear what kind of long-term impact such moves will have. “One of the questions and things to watch in the next 10 years is were lessons learned or are manufacturers going to try and set the clock backwards?” said Jason Levine, executive director of the Center for Auto Safety, a Washington-based nonprofit watchdog organization.

In the case of GM, although the cause of the problem started roughly 14 years prior to Barra’s tenure, it was now her company. She faced harsh criticism and quickly became a CEO under fire for an automaker that was still attempting to reestablish itself following a government-backed bankruptcy bailout in 2009.

A detailed investigation, known as the Valukas Report, found that a pattern of “incompetence and neglect” at GM had led to the defect, which allowed keys in the ignition switch of the vehicle to move out of the drive position, making it harder to control the vehicle.

The culture that led to the crisis is something Barra has spent a majority of the past six years attempting to change. She has restructured safety operations, put additional safeguards in place and fired 15 people who were found to have failed to act on the problem.

“I never want to put this behind us. I want to keep this painful experience permanently in our collective memories,” Barra told employees at a town hall meeting in 2014. “I don’t want to forget what happened because I — and I know you — never want this to happen again.”

GM’s recall of 2.6 million vehicles with faulty ignition switches assisted in record recall levels in the mid-2010s, but potentially dangerous Takata air bags were the main cause for the increase.

“Recalls are certainly an issue that continues to touch everyone who owns a motor vehicle, and nothing drove that point home more clearly than the Takata recall, which went across 19 different manufacturers,” Levine said.

A deployed airbag is seen in a vehicle at the LKQ Pick Your Part salvage yard on in Medley, Florida.

In June 2014, Takata admitted that a Mexican subsidiary had mishandled the manufacture of explosive propellants and improperly stored chemicals used in the airbags. The U.S. charged three Takata executives with fabricating test data to mask a fatal air bag defect. The company also agreed to pay $1 billion to settle the probe.

Prior to Takata, Toyota found itself at the center of federal probes connected to reports of drivers experiencing unintended acceleration in some of their vehicles.

The Japanese automaker was fined billions for issuing misleading and deceptive statements to its customers and federal regulators, including a deferred prosecution agreement with a $1.2 billion criminal penalty in 2014 and another $1.2 billion settlement of a class-action lawsuit in 2012.

Another major recall and investigation in the decade was Volkswagen’s diesel emissions scandal, which began in September 2015 and put yet another nail in the coffin for diesel passenger cars in the U.S.

The German automaker was found to be using software to cheat emissions testing for roughly 11 million cars globally, including 500,000 in the U.S from model years 2009 through 2015. The vehicles were found to emit up to 40 times the legally allowable pollutants.

“Volkswagen’s Dieselgate was so beyond just a recall, that was flat-out corruption,” Cox Automotive’s Krebs said. “They lied and got caught.”

Several Volkswagen executives, including then-CEO Martin Winterkorn, were arrested and charged as a result of the scandal. The company also agreed to pay more than $25 billion in the U.S. for fines and claims. Volkswagen also continues to offer to buy back the vehicles.

Tesla CEO Elon Musk was one of the most prominent auto executive at odds with federal regulators in the 2010s.

Most notably, a September 2018 settlement agreement with the SEC removed Musk from his chairman role of the company. Tesla and Musk also agreed to each pay $20 million in fines.

The settlement stemmed from Musk’s infamous tweet on Aug. 7, 2018, claiming to have “funding secured” to potentially take the company public at $420 a share.

The SEC complaint alleged that Musk issued “false and misleading” statements and failed to properly notify regulators of material company events. Neither Musk nor Tesla had to admit any wrongdoing under the settlement, but they couldn’t deny wrongdoing, either.

Months later, Musk’s deal with the SEC appeared to be in jeopardy when the agency asked a judge last February to hold Musk in contempt for violating its settlement deal. The SEC cited an “inaccurate” Feb. 19 tweet about vehicle production. On that date, Musk tweeted — then revised — projections for full-year Tesla manufacturing numbers of “around” 50,000 units.

After months of back-and-forth, the SEC and Musk reached an agreement over the use of his use of Twitter account. It detailed exactly what kind of information requires formal legal review before being shared.

Musk, under the initial settlement, also had to relinquish his role as chairman of the automaker for at least three years.

The legacies of two of the most outspoken CEOs in the automotive industry in years — Carlos Ghosn and Sergio Marchionne — are expected to be determined in the 2020s.

Ghosn, the longtime head of Nissan and French automaker Renault, awaits trials next year that could lead to him being imprisoned for years, if found guilty. He is accused in Japan of financial misconduct and misuse of corporate resources for personal gain. He has denied any wrongdoing.

The allegations, which led to the executive being arrested, stem from alleged misuse of benefits and company property. The SEC earlier this year fined Nissan and Ghosn $16 million earlier this year over false financial disclosures related to his compensation.

Marchionne, who led Fiat Chrysler until his unexpected death in 2018, has been implicated as part of an ongoing federal investigation into corruption of the United Auto Workers union.

The Italian-American executive has not been named by federal prosecutors, but he has been connected to the probe that has led to charges against charges against 13 people, including eight convictions of officials affiliated with the union and three Fiat Chrysler executives.

Marchionne also was at the center of allegations as part of a federal racketeering lawsuit filed last month by GM against Fiat Chrysler.

In the lawsuit, GM alleges it was harmed as a result of “corrupted” collective bargaining involving Marchionne and other Fiat Chrysler officials for allegedly bribing union officials into taking company-friendly positions that resulted in unfair labor costs and operational advantages.

A Navy SEAL explains why you should ‘test your will’ at least once a year
Fermenting: the future of animal-free meat? | FT Tech
Why South Sea Pearls Are So Expensive | So Expensive | Business Insider
Sean Parker and George Soros have given millions to support marijuana legalization
All you need to know about caviar